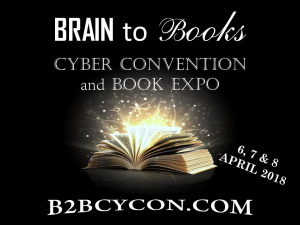 Running from April 6th through April 8th 2018 this online book event brings readers and authors together for a weekend of books, and book related events.

I am participating this year again in Brain-to-Books CyCon, which is on this weekend (April 6,7,8). For those who don’t know, this is a convention dedicated to lovers of books of all genres, and runs for a full 3 days (all at the comfort of your own WiFi). There is a lot going on in the convention, and a good start in the Events page. I’m participating in several of them, and you can find Felix and me also on:

We’re also part of the blog tour, on this year’s subject of What Elements Define Fantasy For Me. This post will attempt to answer that, with links to the next chain in the tour at the bottom.

So what elements do I find definitive of fantasy? I love speculative fiction in general. That is an umbrella term for anything with a “what’s if” somewhere in the setting – science fiction and fantasy in their broadest definitions. But I also love reading historical fiction, mysteries, thrillers, and other genre. In almost any fiction novel of the sort you’ll find an element of world-building: some elements that deviate from everyday reality, and have to be done with inner consistency or risk ejecting readers from the story on the grounds of disbelief. That could be the secret organisations in a thriller novel, or the period background in historical fiction.

But, as much as Jason Bourne’s martial art skills can be termed unrealistically fantastical, is not what makes the more narrowly defined fantasy genre (not for me, at least). For speculative fiction to be more about fantasy than any other elements it has to have a sense on unexplained magic.

It may sound obvious, but there are deeper layer. For example, most futuristic Sci Fi has unexplained magic, but they are not fantasy. In the words of Arthur C. Clarke,

But science fiction (at least at it’s hard core) makes an attempt to answer the “what if” of technology affecting human condition. There is a certain extrapolation of feasibility of technology (within the given immutable natural laws), and then an inquiry into how society will deal with them.

Sure, there are plenty of science-fantasy blends on the edges. The space-wizards-with-magic-swords franchise has a lot of fanatic fans, regardless of any froufrou with midichlorians. But it’s that focus on unexplainable mystical qualities together with a disinterest in realistic extrapolation of technology that gives it the fantasy element, that pushes it from science fiction to science fantasy.

Perhaps we should, at this point, define magic for a better discussion. Wikipedia says that magic is “powers that do not naturally occur in the real world”, but for me that’s not quite enough. You could say that about SciFi technology. For me, at least, magic has to have a certain surreal, unexplained quality to it.

When we fantasists talk about world-building, there is a lot of talk about magic-system. There should be something coherent, that doesn’t just pop-up like a deus ex machina to resolve sticky plot point. There is that, true, but if you go too far you’ll flip Clarke’s saying:

So there’s a balance there. Yes, we can have fantastical elements and powers that do not exist in the natural world. But there should be something beyond that, a mystical awe-inspiring quality.

If we take my own brand of historical fantasy, the “what if” that I started with is what would a Roman-esque society would look like if magic was real. Roman society had a practical approach to things. Worry less about philosophy, and more about how to put it to a good use in building an empire. And there is that in the books when, in the background,  I examine how the Romans might have used magic in the same way that they’ve used engineering. But in both the Felix mysteries there are other elements. There is the constant debate amongst philosophers about the origin of magic and gods, and then there are the intimate experiences of Felix as he runs into things he can’t quite explain. These aren’t central plot elements, they lie at the edges of things; they reflect the wonders of the natural-magical world.

So for me, a good fantasy has magic, in a way that doesn’t bore me. Both in not being a flimsy plot tool, but also isn’t too predictable and too explained. It’s just like the depths of the oceans.

Hope you enjoyed my musings. Please go and visit the other stops at the blog tour, and don’t forget to say hello 🙂