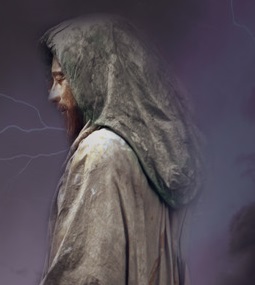 Felix was in a funk (what with a broken leg), so I let him have a bit of fun.

Enjoy this little excerpt from the upcoming In Numina.

My mobility impaired, I could not take on another case. I was in no condition to walk far, but I limped down to the docks between the grain and fish markets, found a good corner, chalked ‘FORTUNES TOLD CURSES IDENTIFIED’ on the wall, sat down on a folding stool, put on airs, and busied myself with a scroll of Assyrican star-gazing that looked impressive with all its strange and foreign symbols.

People being what they are, especially sailors and dock workers, I scraped enough small coins that day to cover a night of drinking. Calculating people’s horoscopes is tedious, but at least cleaner than haruspicy. One sailor wanted me to write a curse against his fellow, whom he swore stole his lucky fascinum when they were asleep. I scribbled a supplication to Hygieia — about as magical as a bucket of piss — to withdraw her protection from the thief’s health. I also sold him a mild laxative in the guise of ‘special medicine’, and told him to slip it in the evening meal whilst at sea to make the guilty party revealed to all. On the off-chance he was wrong, the laxative was to go into the main pot, with the supplication into the fire. I taught him a meaningless doggerel to repeat, so I could claim it was his fault for botching it. Thoughts of future winds generated below decks by an overly flatulent crew cheered me up.

It also kept my mind away from Aemilia.

Until In Numina is released, enjoy the short stories, or grab a copy of Murder In Absentia (because you need an extra one as a gift for someone special 🙂