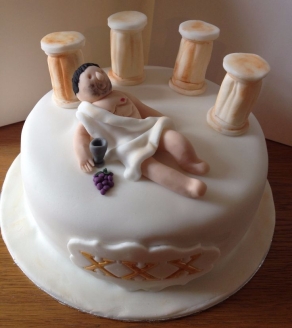 It’s a well kept secret that the end of February marks a time of reflection for yours truly. In (very) ancient Rome this was a time of purification (februum), following which the new year began in Martial vigor. Now it’s just time for cake (because cake).

While my cake might have, err, other Roman numerals on it, it’s as good a time as any for some introspection and review. I won’t repeat what I wrote in the end-of-year post. Instead, I’ll just jot below some updates and thoughts.

First, while I originally set myself the goal to publish In Numina around this time, it just wasn’t meant to be. Just like Shrek, I am an onion with many layers: I took on a long break to spend time with my wife and family, my daily product-management role is exciting with launching a significant new generation of my product, and even my publishing hat got its dust shaken off as I published a book by a fellow sci-fi author.

All of which means that while work on In Numina continues in earnest (it’s now with the final proofreader), the expected publication day is around April or May this year.

Speaking of the break, my experimental self-imposed removal from social media can be announced as a success. Life is better with less notifications, and the impact on book sales is negligible. While reaching out to build up initial momentum was important, I fell into the sticky tar pits of modern life’s continual connectivity. It quickly reached the point of (rapidly) diminishing returns, where I was chasing those notifications rather than writing. This is especially non-productive, since the social media giants continually restrict organic reach (i.e. who sees original posts) in favour of paid advertisements.

I do believe I’ve reached the point where my focus needs to be on producing content: write more stories, and use paid advertising as needed. Since that requires only minimal social media involvement, I aim to keep away. While I may miss the people I’ve met, I do not miss that mode of communications. Call me a curmudgeon, but I’d like to go back to old-fashioned letters. I’m still reachable through here and always happy to discuss books, but I quite enjoy life without those little “unread notifications” blinking counters. I’m certainly more focused and productive.

So here’s to a year full of happy tidings and good books!

… and also filled with dancing gladiators, because (a) the next Felix volume is called In Victrix and is about the life of such, and (b) I can’t stop looking at this gif…